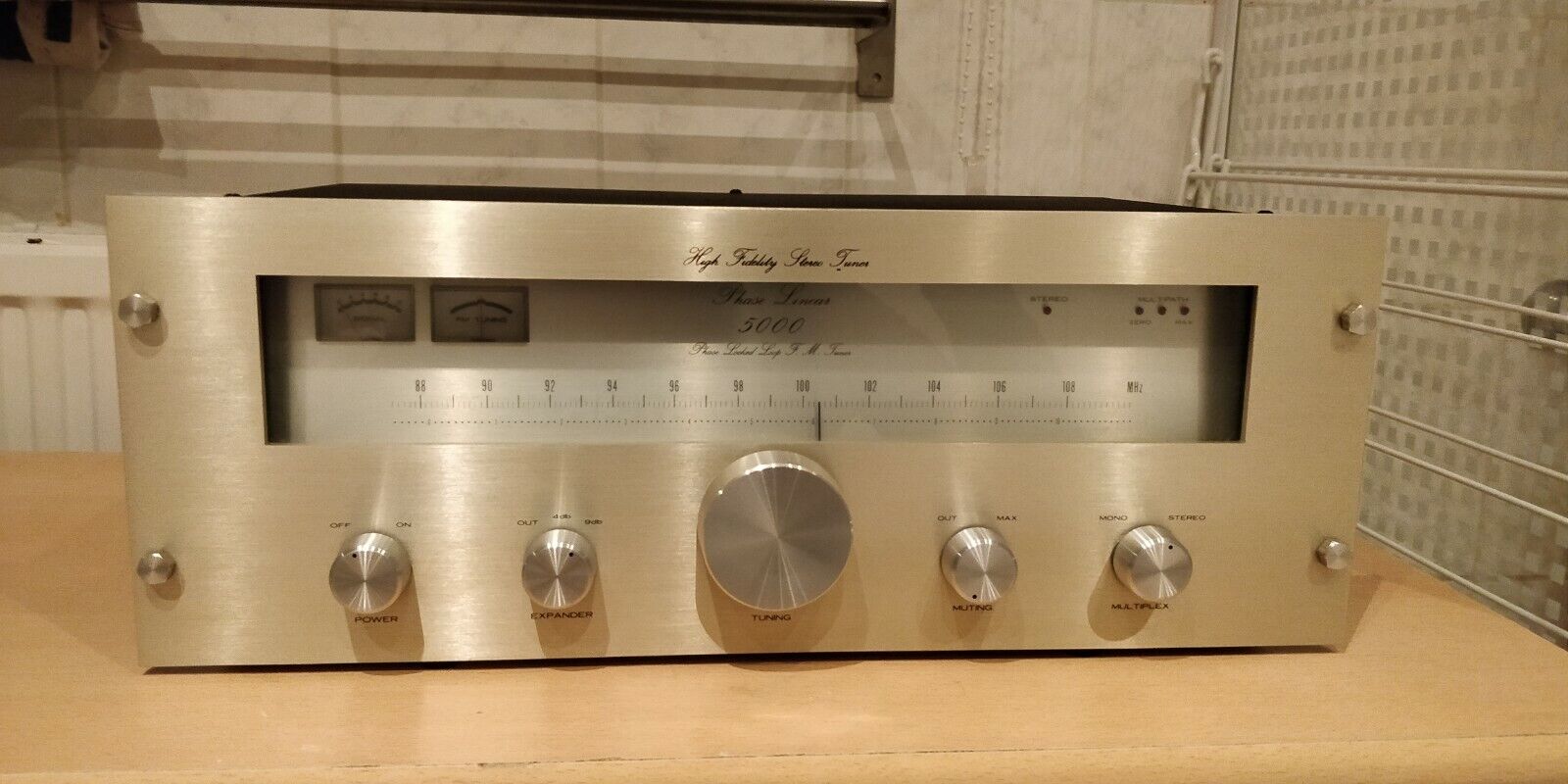 Shipping risk from buyer
The shipping price depends on the country of destination
Phase Linear Model 5000 (1976, $580)
The Model 5000 is a 5-gang, FM-only tuner with a very large cabinet in relation to its contents. Like the Model 5100 Series Two, the 5000 had only two ceramic filters. Our contributor Ryan says, "This tuner grossly overemphasizes the treble. Here's my theory: The 5000 has some sort of audio expansion circuit built into it, probably something akin to a DBX 1BX or something like that, and I don't think the thing ever switches completely out of the circuit, even when set to zero expansion. While some might like this expansion compared to a 'normal' tuner, I simply found it annoying after extended listening. Now, onto the reception: It's not great, but decent. There is no switchable bandwidth, but it is readily apparent that the tuner is engineered for middle-of-the-road performance tending more toward decent DX reception than local wideband performance. It never sounded terribly great on local stations, but seems to be quite selective. Beneficially, the stereo threshold seems quite low. Internally, the PL 5000 is a tuner on a bunch of chips with a face lit up like a candle. I've never seen so many fuse bulbs used to light up a face. There isn't hardly a discreet component in the thing: everything's on a chip, but most of them are actually socketed as opposed to soldered right on, so upgrades might actually be a fairly easy endeavor. Consequently, the tuner doesn't weigh a whole lot, and wastes a ton of space inside the chassis.
(FEATURES) LARGE SLIDE RULE DIAL - VARIABLE MUTING 2uv to 100uv: - FIXED AND VARIABLE OUTPUTS: - 25usec. and 75usec. DE-EMPHASIS; 75 ohm CABLE CONNECTOR; EXPANDER WITH SELECTION FOR 4DB AND 9DB, TAILORED TO DECOMPRESS TYPICAL FM COMPRESSION TECHNIQUES; L.E.D. MUITIPATH INDICATOR WHICH SHOWS INSTANTANEOUS MULTIPASS DISTORTION; CENTER TUNE AND SIGNAL STRENGTH METERS WITH BACK PA NEL CALIBRATION ADJUSTMENTS; PANEL LIGHT DIMMER SWITCH........ (SPECIFICATIONS) sensitivity 2.0uv 50db quieting level: 5uv mono, 25uv stereo. signal to noise: 74db mono 72db stereo (with expander) selectivity 75 db. capture ratio: 1.7db. distortion: 1khz-less than 0.25% mono or stereo. separation: greater than 40db. 38khz suppression:greater than 40db.
Weight: 6kg